What’s the oddest drink you’ve ever dared to swallow? There are some dubious cocktails out there, ranging from Lobster Martinis to caviar-sprinkled cocktails. One wonders if one needs to be thoroughly drunk before ingesting such strange spirits, but the truth of the matter is that many weird concoctions are quite popular in various places all over this big, wide world. They say there’s no accounting for taste, after all. Still, if you consider yourself an adventurous alcohol aficionado, perhaps you’ll order one or more of the following crazy cocktails the next time you go out bar-hopping.

So, yes, you are seeing a preserved toe in a glass with alcohol. This weird Yukon cocktail is a staple in Dawson, where the drink came to be back in 1973. Legend says that over the years, nine toes have been accidentally ingested. That’s bad news for any number of reasons, not the least of which is the fact that it evidently costs $2,500 to swallow a toe—it’s a penalty, you see. For the record, it appears as if the liquor you drink with your toe isn’t nearly as important as the toe itself. By the way, if you want to become a true “sourtoer,” the toe has to touch your mouth as you drink. Ugh…

This is a real drink. People actually put this concoction into their mouths, they let it touch their tongues, and then they swallow it. Well, no, that’s a lie. First, they shake their heads fervently and enthusiastically, then they swallow. See, the Cement Mixer is a combination of Baileys and lime juice. Let that settle in for a second. All right. So, you mix those two together, then you take the shot and shake your head, right? As you shake your head, the Baileys and lime juice will congeal into a lumpy, gooey mess—about the same consistency and texture as wet cement. 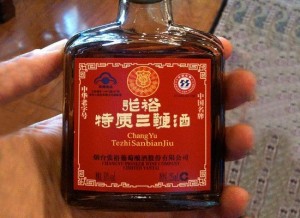 This is kind of cheating because this isn’t a cocktail, it’s just a drink. It’s a wine, actually. Well, you can call it wine. Yeah, it probably qualifies. It’s hard to believe that even the most enthusiastic wino would drink Three Penis Wine, though. It’s not just a cute name. The process used to make the wine includes three penises. Specifically, it includes a dog penis, a seal penis, and a deer penis. Some variations substitute the seal penis for snake penis. 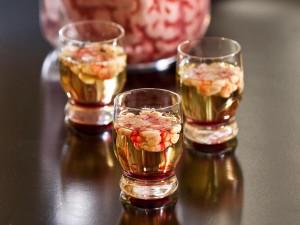 Oh, this drink. Baileys is back at it. On the surface, the ingredients that go into this cocktail aren’t too bad. In addition to the Baileys, there’s peach schnapps and grenadine. Simple, right? Innocent. No big deal. Except, there’s one problem: once it mixes with the schnapps, the Baileys goes crazy. It automatically curdles, creating a horror that looks exactly like a bloody brain. Thanks, grenadine.

That sounds appetizing right off the bat, right? It doesn’t get better. This dumpster fire of a shot uses just two ingredients: Jagermeister … and mayonnaise. Let’s repeat that: mayonnaise. That’s it. Pour the Jager into a shot glass and then add a dollop of mayo. It’s horrifying. Enjoy.

There’s beer that tastes like pizza, wine made out of oysters, and vodka with scorpions. Honestly, there’s no end to the weird things people will do with alcohol. So, once again, what’s the weirdest drink you’ve ever swallowed?