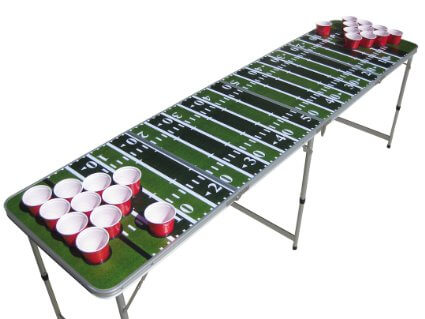 Beer Pong: The Classic College Drinking Game that we all remember…or don’t remember partaking in.  Whether you’re 21 or 45, Beer Pong is one of those tried and true classic drinking games that just never seems to get old.  I mean come on, they even have beer pong-esque type games at arcades!  Exhibit A:

Now that we have established that it is ok to love the game, it’s time to determine the rules for laying it!  The real question is: which rules do you go by, the “original” or the “official” rules?

The Original: Originally, beer pong was just played by people who wanted to combine drinking and playing.  You simply line up ten cups on a ping pong table in the formation of bowling pins and take turns throwing a ping pong ball into each one.  The use of paddles is optional.  If the other player lands a ball in one of your cups, you must immediately chug the cup and remove it.  This is the easy way to go.  But you guys order beer online, easy is SOOOO last year!  Let’s take a look at the official rules.  Brace yourself, they’re quite…official.

There are actually a LOT more rules, but we don’t want you to get so overwhelmed you choke on your beer.  Also, ironically enough, official beer pong is actually played with…wait for it…WATER!  Yeah, so for the sake of your sanity..and our business…we suggest that for future reference, you stick to the original rules.