Drinking Games for any Great Pregame 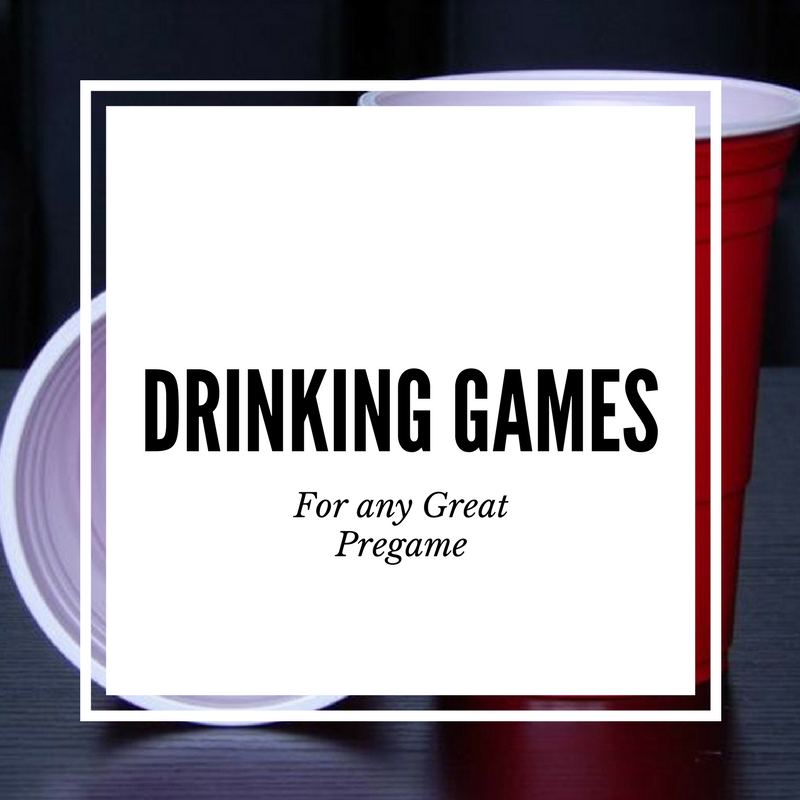 Ever show up to a pregame and everyone is painfully sober? These 5 amazing drinking games will take care of that problem! Just grab your deck of cards and your drink of choice and get ready for a great start to a great night!

Starting off with one, take turns in a circle counting off until the number “21.” Whoever says the number 21 is allowed to institute a new rule for counting (i.e. switch the numbers 7 and 14 while counting, so the count will go 1-2-3-4-5-6-14-8 etc.). As the game progresses, the rules become more complicated (“at number 18, impersonate the person to your left”), and every time a rule is broken, everyone has to take a drink! This game is a super quick one for a good buzz.

This game requires a deck of cards. Keep the cards facedown and distribute the deck evenly amongst everyone present. The first person flips over their top card, followed by the second person. If their cards’ suit OR number matches, both people must drink for the number on their individual cards. For example, if person A drew a 7 of hearts and person B drew an ace of hearts, person A drinks for 7 seconds and person B drinks for 14 seconds while everyone else counts them down. Person C would then flip their card, and if they drew a “heart” card, or drew an ace, persons A, B, and C would all drink, all being “linked.” Cards are continually drawn in a circle until the deck is finished! The cards and their respective times are as listed: 2-10 = 2 seconds – 10 seconds, J = 11 seconds, Q = 12 seconds, K = 13 seconds, and A = 14 seconds. Drink up!

This game also requires a deck of cards and a large cup. Spread the cards in a circle facedown around the cup. Each person playing, then, draws a card and follows its assigned rule. Whoever messes up the rules takes a drink! The game ends when the last card is pulled or the “King’s Cup” is empty. Card rules are as follows:

Ace: Waterfall. Every player starts drinking at the same time as the person to the left, and

can only stop when the person to their left stops.

Two: You. Point at another person and they have to take a drink.

Three: Me. Person who pulls this card takes a drink.

Four: Floor. Everyone reaches down to the floor, the last person to touch the floor takes a drink.

Five: Guys. All of the guy players take a drink.

Six: Chicks. All of the lady players take a drink.

Seven: Heaven. All players put their hands up, last person to do so takes a drink.

Eight: Mate. Whoever drew the card gets to pick another person to drink every time they do, this continues until the next eight is drawn.

Nine: Rhyme. Whoever drew the card says a word, and other players have a limited amount of time to say a rhyming word. Whoever cannot think of a rhyming word must drink.

Jack: Make your own rule. Whoever draws the card may create a rule of their choosing. Personal favorites are “remove the little man from your cup before drinking” (everyone pretends to take a little man off of their cup every single time they go to take a drink) and “put your chin on the table if you say a swear word” (if someone drops an f*** bomb they keep their chin to the table until the next person swears). The rule continues until the next Jack is drawn.

Queen: Question master. Whoever draws can ask questions, and whoever answers has to take a drink. This continues until another question master is established.

King: King’s cup. Whoever draws this card pours some of their drink into the King’s Cup. When the last card is drawn, that player has to finish the cup, ending the game.

This one is fun to find out what your friends really think of you. The rules are that the person to your right (or left) will whisper to you a question, the answer of which question will be someone in the room (i.e. “who is the most annoying person in this room”). You then respond with that person’s name out loud (or point). If anyone wants to know what the question was, they have to take a drink. Be careful what you drink for!

Tagged under: cheers to the governor, drinking games, fun night, king's cup, linked, never have I ever, paranoia, pregame